Finally got some new toys, and I am loving them! 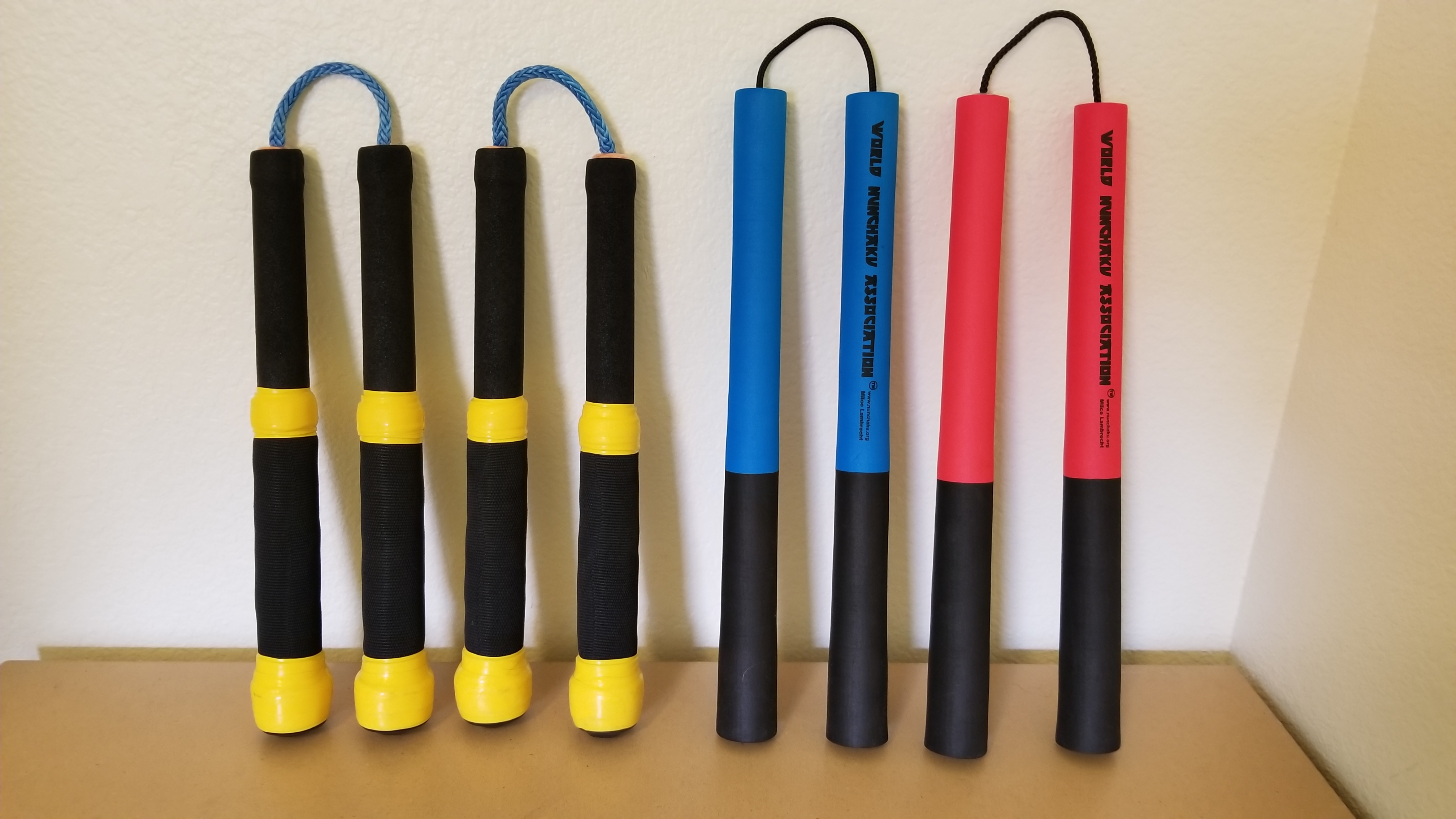 WNA Safety Nunchaku
I've seen increasing use of these in the nunchaku community, so I gave them a try. You'll usually see them featured in yellow and black colors, but I was delighted to see the color choices they have (everything besides orange or purple). I went with red for the right hand and blue for the left, as some of my other martial arts weapons follow that trend, including other nunchaku.
They are definitely super duper lightweight, but the balance is great, and they are undeniably safe to use.
The handles are 12in long, which is pretty much the very upper limit for chucks. I'm not quite used to it, but it makes them a great pair for striking and practicing things like combat or kata.
They offer junior and senior sizes, with either round or octagonal handles. You are seeing senior size with round handles.

Custom Dark Monk Studio Nunchaku
I was especially excited for these. I proposed a firmer padding for the lower portion of the handles, as opposed to the regular model which is softer. I really love the feel of these, and I can't describe well in words but I think the balance is improved in some mystical way. It doesn't feel like the balance moved… it just feels like it got… better?
Grabbing them on the end is a different feel from the standard set, but I feel pretty natural with it. It comes down to taste probably, but this is something I've desired since I got my last pair.
And for the record, I am still continuing to use that last pair even after getting these. These chucks are wonderful.
Dark Monk also sent Ken a pair of these to try out, and it seems that he likes them a lot too!
Of course, they're firmer, so they would hit a little harder. I knew this going in though.
I went with yellow for these. Generally many people with these chucks would get yellow, and it looks darn good. However, I wanted some individuality, so I went with red and blue as usual for myself on my previous pair. I ended up coming to order yellow in the end because I see that the visual trails are so much more apparent and they just have that iconic nunchaku-associated color, as seen in the time of the Bruce Lee craze and the influential WNA. Black and yellow has become traditional in its own right.
While tradition is cool, I cannot lose myself though! I requested Dark Monk to fit these babies out with their Dragon Rope X instead of the standard Technora rope, which allowed me to splash in some color. I thought blue would have been a great choice to contrast the yellow, and I believe it worked quite well!
I have been wallowing in the realization lately that I could have done red chucks in the right hand with blue cord, and blue chucks in the left hand with red cord, which may offset the subdued hues versus the yellow configuration. However, I am happy enough with this, because I love a good cyan/yellow combo anyways.
The Dragon Rope X is said to be less abrasive than the Technora, which makes it a good choice for using with a rope dart. I figured it would help me since I have been doing a lot of string manipulation and roughing up my finger skin. However, I find it to be a bit harder, and this is likely due to its thinner width and greater durability. However, I haven't done much extended play and hope to see if it just feels harder but truly is less abrasive in the end after all.
It looks like the color holds up, which is a huge plus.
They did recommend supergluing the knot for the Dragon Rope X because it is thinner and may also come undone due to its slickness. However, I haven't done that because it doesn't seem to give when I tested pulling the knots (also, the cord on both chucks is at the PERFECT length, and don't want to risk opening them up again haha).
Dark Monk did forget to fix out the chucks with the Dragon Rope, and shipped them with Technora. I let them know and they were very nice and instantaneous in supplying two feet for free. On the plus side, I have two brand new strands of Technora, so I can replace those in my old Dark Monk pair, which has almost grinded through its own Technora.
On the downside though, it is super duper easy to crossthread the aluminum piping when taking apart the chucks and putting them back together. On my red chucks, I had to bore a bigger screw through the hole because the threads are too fine on the existing screws and shave away if you're not meticulously careful. So when I do take my red and blue chucks apart to replace the Technora, there may be a chance of losing one for good (I mean I can make it work, but putting in new screws adds distracting topography on the handles when spinning).

I love both of these pairs, and I would call them my primary practice pairs, mostly with the Dark Monk Studio Nunchaku.

confused
0
confused
4th Degree Black Belt in TKD. Practiced 16yrs, taught for 6. Dabbled in Capoeira and Kobudo. Majored in weapons and acrobatics. Nunchucks and Bo Staff are my faves.