This journey started when I saw this video:

And then I digged into internet to found out what were this magnetic nunchucks, for a week. Yes, a complete week, to found what was the original vendor (FB page of the shop), the price, which components, and the polish duplicate I can afford (and now I have). I watched nearly all the videos about the magnetic nunchuck, all I can found.

And it was just the beginning 😀

And it was fun, but also really disappointing. The nunchucks were too different from ones I played with, so I needed to adapt any single move. The 20 first minutes, when I discover the “magnet effect”, was really cool, I was like a child trying to reconnect the magnet again and again, but it became a really painful when I tried to spin them a bit. I wasn’t enable to do my favorites wrist rolls. And the worst part was after a week spining only the MNs (magnetic nunchucks), I found myself stuck when I tried to return to my good old friends. Switching from MNs to training was so hard because of the length of the rope and the size of the sticks that I finally put the MNs in the nunchucks box, for good.

Side note: I always play with nunchucks in the streets, so my nunchucks must be more resistant, what the MNs was’nt, obviously. They’re not broken, but the tips are ruined. 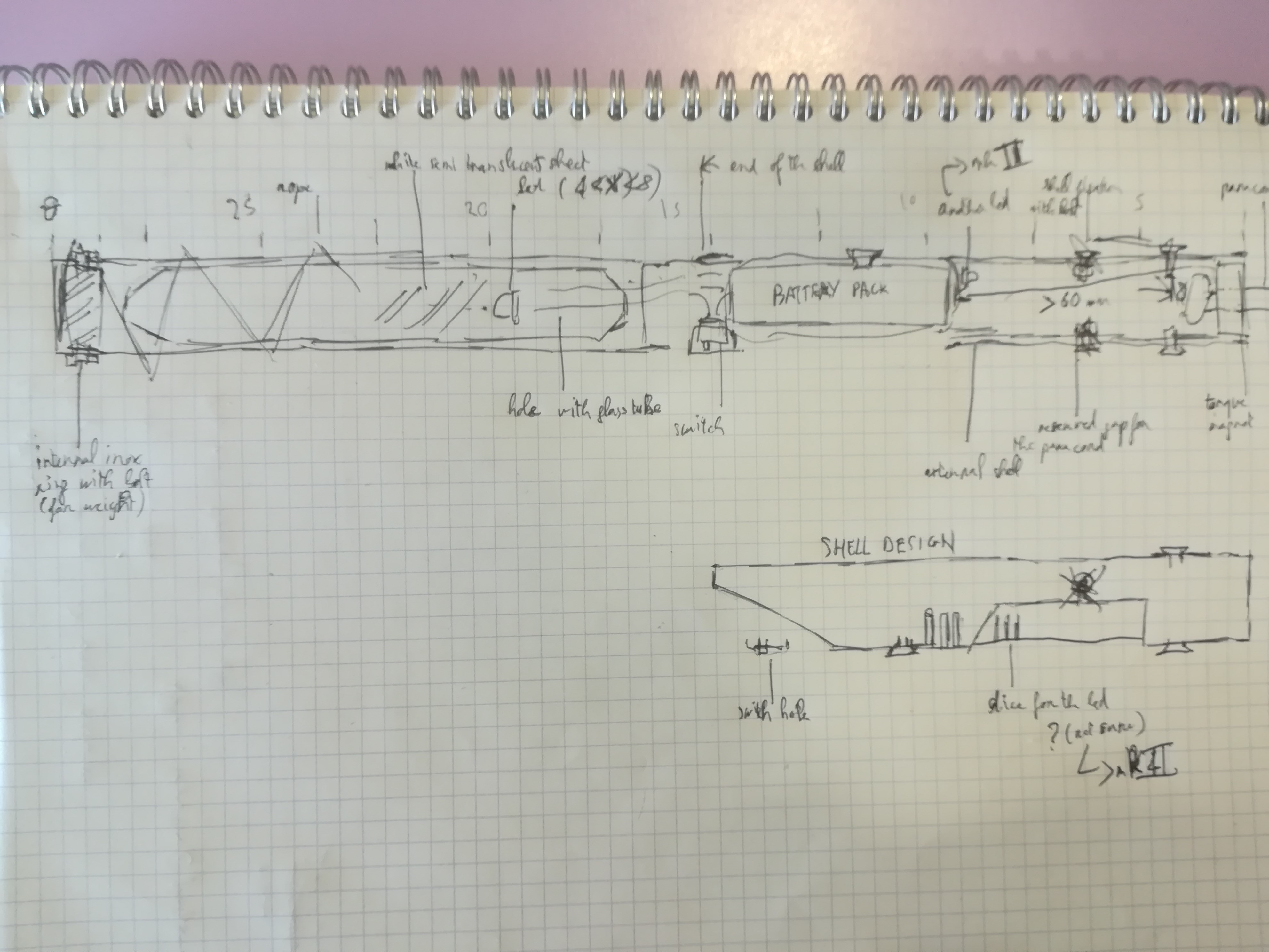 One day, at the office, I was taking a break, and for a change I took a pen and a notebook instead of a cup of coffee. It’s not something I do very often, and I don’t know why this particular day I did it, but after an hour (yes, I can take really long break), I ended up with this result. And in my it was like “I dreamt about something so crazy, it must be impossible”.

The combination of magnet and nunchuck already existed, but with that type of lightsaber handle instead of the classic sticks? The answer is: yes, and no. You can find some custom and beautiful nunchucks on internet, some with leds, some without, but a real mix of lightsaber handle and nunchucks are very difficult to find (I found a link once, and I never succeeded to find it again).

After some toughts, the first guidelines started to grow in my head: “I need a way to insert the leds in the sticks”, “the magnet must be properly lock”, “I want something easily switchable between training and lightning mode”.

At the same time, I began to work with some coworkers to what we called the stargate project, an arduino setup to animate some leds on this stargate atlantis reproduction: 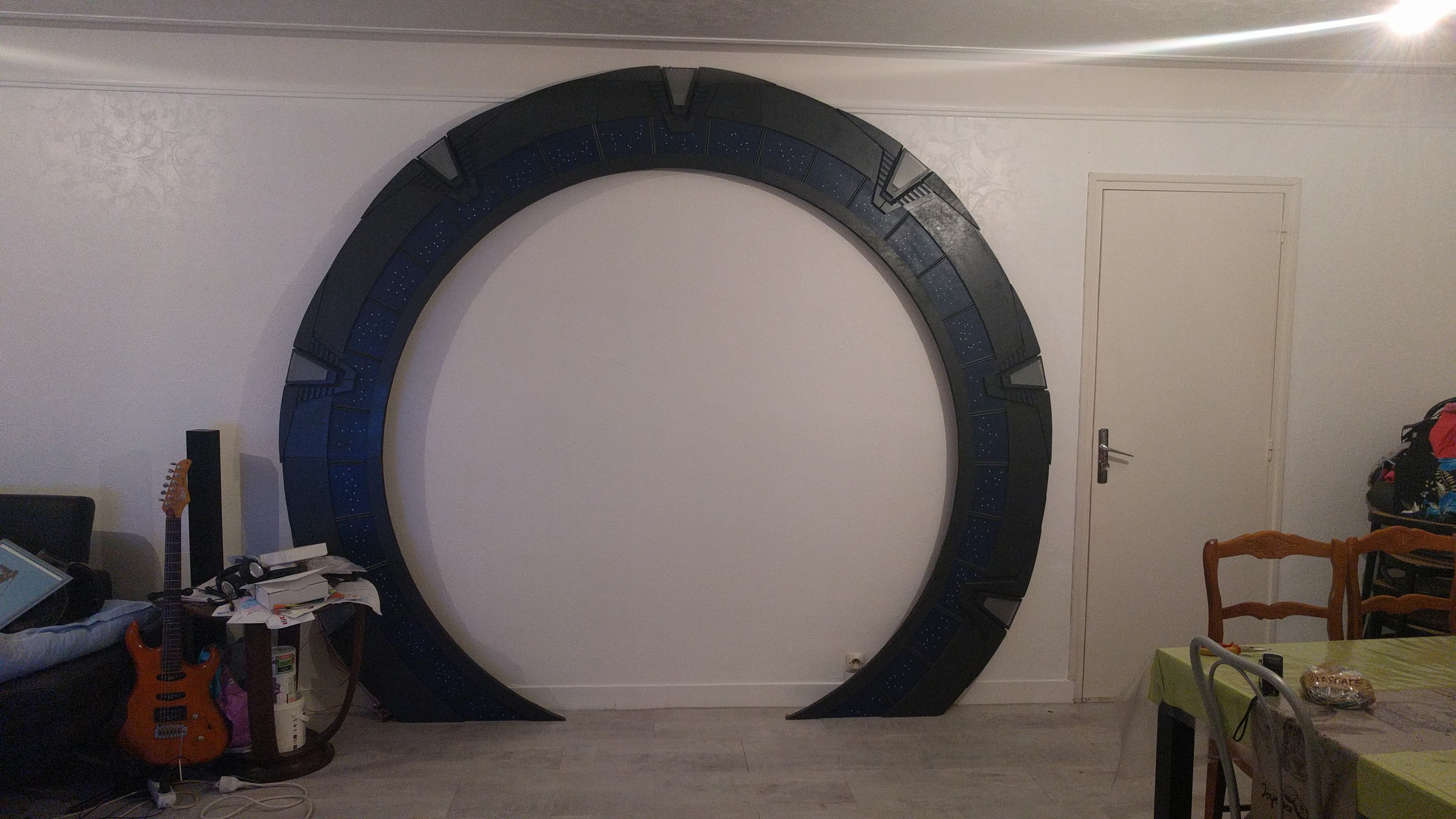 So I started to play with some cool stuff, like the arduino, led strips, and a 3D printer.

After some weeks of discussions and drawings, I finally started the MSN project with some help from the stargate team.

Third step: definition of the concept

Before running blindlessly into the MSN project I decided to put on paper what I need to take care of, and what is not a real goal. I don’t need a final product with as much details as what you can find on custom lightsaber handle, I need it to be functionnal, and after that point, I will see. I want something that works, something efficient and sturdy.

Here the main goals of the MSN project:

With this goals in mind, my first move was to do the easiest one first, but also starting to work on the others in the same times. Why in the next chapter.

The easiest part is to build a magnetic nunchuck. And to do so, I need some magnets with holes. In the same time, and mostly because I have some days to spare waiting for the magnets, I designed the first 3D printed model: 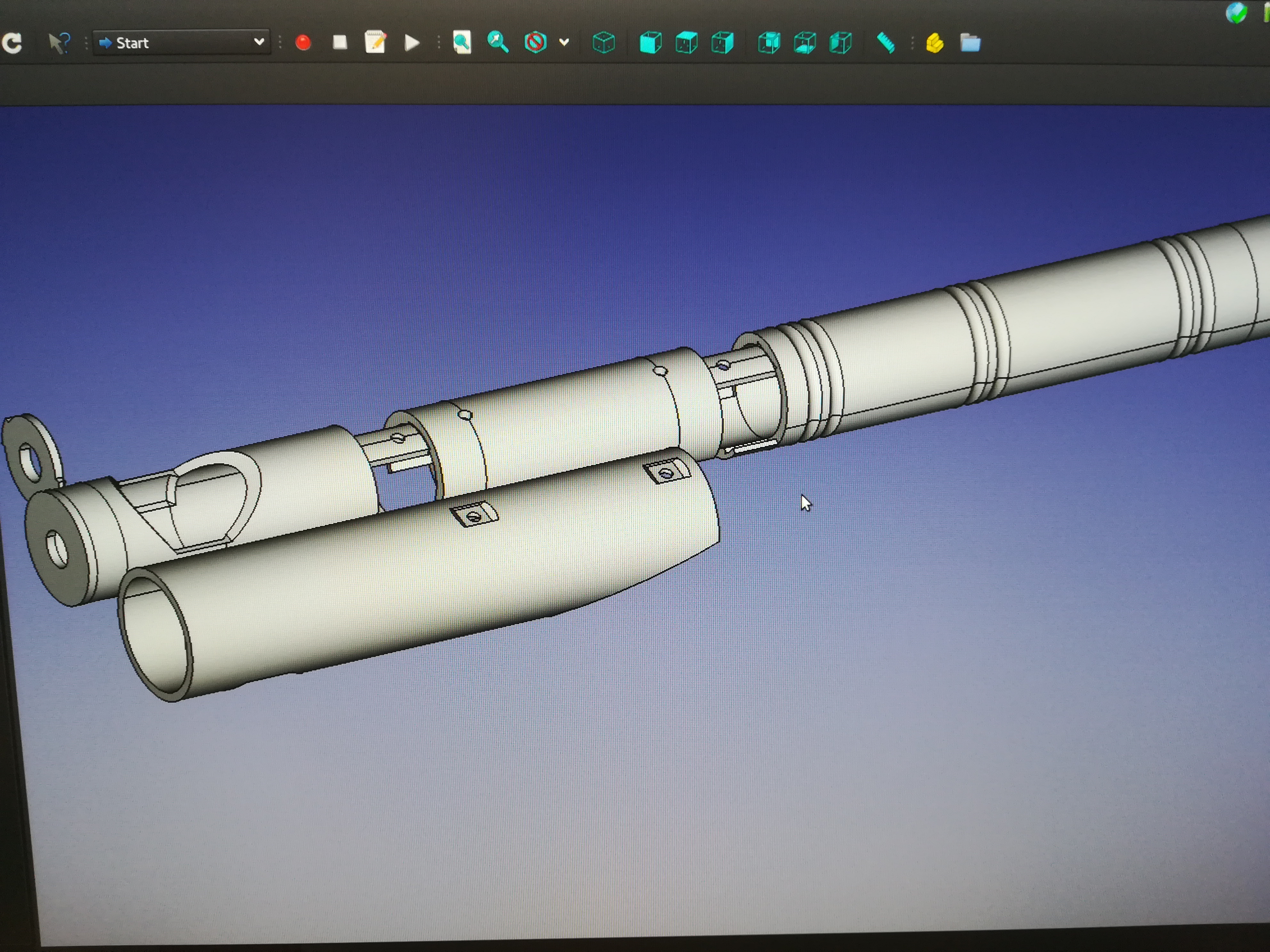 And of course, I printed it: 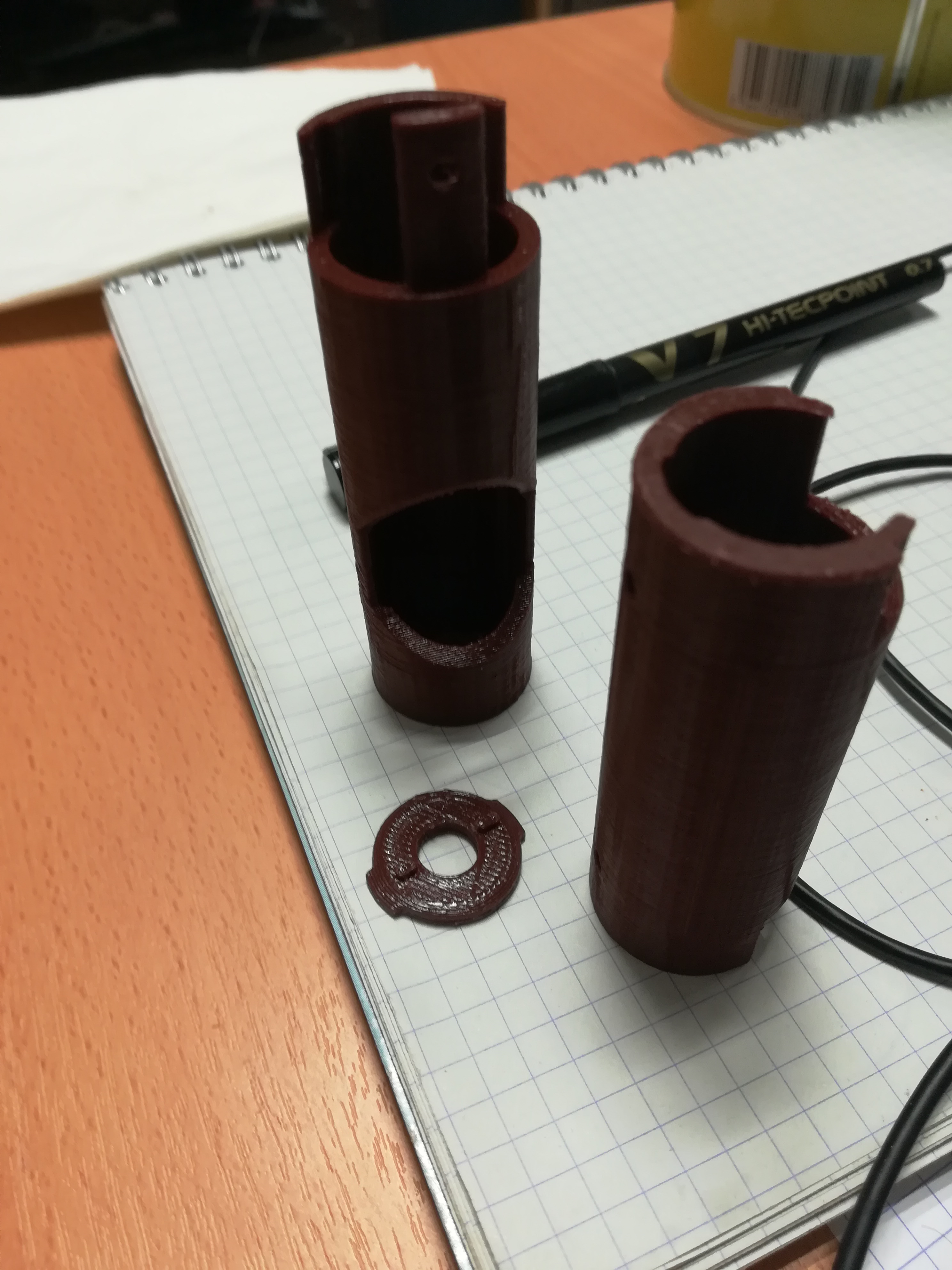 And of course, it doesn’t work, at all.

So I decided to go to a DIY store, to buy some pipe, and try something else.

In the meantime, I worked on esp8266-01, a very tiny little wifi devboard, so small you can put it in a pipe no bigger than 16mm diameter (0,63″). I soldered some leds, bought others stuff, work on a phone app, made some coffee. A lot of coffee.

And one day, I came up with this one: 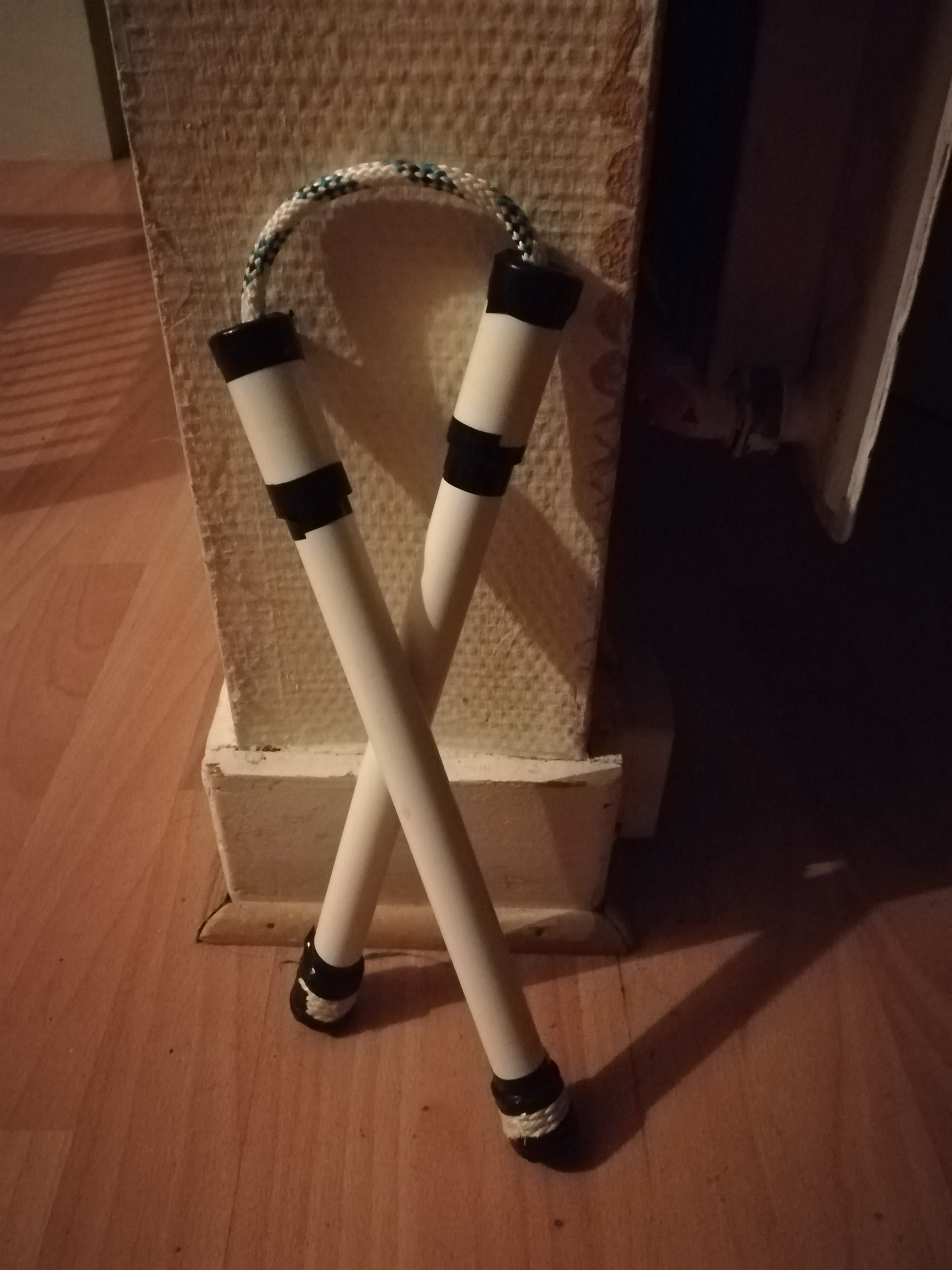 It doens’t look like that right now, I add some grip, but the main idea is already here. With this prototype, I reached some goals:

Fifth step: what I need to do now

Of course it isn’t finish yet, but I’m very confident as I already work on nearly every part of the electronics. For christmas, I worked really hard on the app, and manage to activate the leds! Now all I need is to write some code to being able to truly change the color with my app, on my phone. A matter of weeks, maybe days.

I already sent for 3D printing the stick part which secure the magnet. For now it works only with tape, a lot of tape, and some glue, and I need something more reliable. Again, a matter of weeks, the design was sent two weeks ago. A matter of weeks.

In fact, the most critical part is the soldering, with all the wires to connect, to double check, and put into the pipe. Not as easy as it sounds, because the pipe is very narrow. But I’m confident 😀

A made a test with some classic leds with only one color, and it looks awesome, but I really want to be able to choose the color on the fly, it’s just so cool.

First, the real design I want for the nunchucks. I have a precise idea of the final design I want, and I started to make some tests. I clearly need some help, but after all the work already done, I think I can push a little bit further. It’s a true evolution because I need to change a lot of things in the switchable part of the sticks, from the leds to the switches, and most important the pipe. It will be a great challenge.

Second, I want the leds to react to movement. I know how I can do that, and I will do that, but it’s not easy to do for me. For the moment. I need to learn a lot, again, and to find the right electronic part to do the job, and to fit in a small place alreaady overpopulated.

I’m working on the code for now, waiting for the last parts to arrived and start again to put together all the stuff. I hope to finish the first real MSN product for February, and maybe the final for June.

But what I want to write right now is never give up. It tooks me 5 months to reach the step 5, and I had many occasion to stop and say “it’s too hard”. When I broke the first 3D printed prototype, it was really hard, I spent so much time learning how to use the software, to take care of every constraints for 3D printing, to manage the room for the rope and the magnet, it was very painful to see the obvious flaws, and start over. But I did it, and I learn a lot. About 3D CAD, about programming the esp8266-01, about the leds and how to use them properly, and also about myself.

Life is a long learning course, where you can choose to look outside and wait for the ring, or to put all your strength to build yourself up.